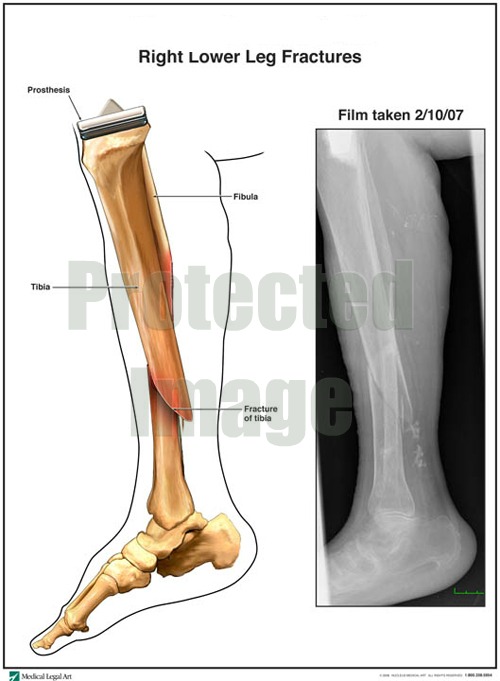 After the fall, the patient was transferred to the hospital, where the fracture was reduced and a long leg fiberglass cast was applied.  The patient remained in the long leg cast until July 6, 2007, at which time a short leg fiberglass cast was applied.  The patient sustained abrasions to the leg caused by friction from the leg casts. The abrasions took several months to heal.  She also suffered swelling of the right lower leg, which required her to keep the leg elevated while in bed.  She also developed a pressure ulcer on her right heel from prolonged casting of the fracture. The pressure ulcer required debridement, but ultimately healed with scar tissue.

The leg fracture also caused the patient to endure significant pain. She was medicated with morphine at the hospital. Thereafter, she was prescribed oxycodone for pain. From February 17, 2007 through July 14, 2007, her pain was consistently rated at 4 to 6 on a scale of 10, with 10 being the most severe pain possible.

The patient also remained non-weight bearing on the right leg for four months through June 6, 2007. She was required to wear a fracture boot when being transferred, turned, and repositioned in bed to prevent dislocation of the fracture. Her fracture boot was discontinued on September 14, 2007.  The patient died on November 22, 2007 – nine months after the fall – for reasons unrelated to the leg fracture.